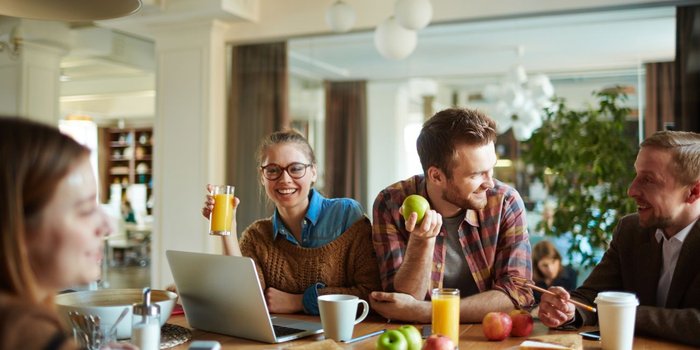 American productivity has long been in decline. A study by Gallup and the U.S. Council on Competitiveness found that despite significant improvements in job growth and unemployment since the Great Recession, the U.S.’s economic growth and fading productivity reveal that the nation’s recovery has been shaky at best.

Perhaps this isn’t surprising. Gallup surveys have also indicated that less than a third of Americans are engaged in their jobs. Engagement and productivity are inextricably tied, as they should be. But just because the country as a whole is grappling with declining productivity doesn’t mean the same fate will befall your office. The only way industries will regain their former productive glory — or fledgling industries will make new records — is through individual companies finding ways to fuel their team members’ productivity.

Here are five ways you can do just that:

An American Management Association survey of more than 300 HR executives found that opportunities to enhance skills were crucial to top performers. This means that the employees who sparkle the most are motivated by opportunities to sparkle more brightly — and this can boost the retention of these highly skilled employees. Improved skills and increased longevity with your company is a big win for you.

You don’t need to break the bank to offer professional development. You can cherry-pick the specific employees who stand to benefit most — and even offer it as a reward for behavior that deserves to be replicated — and then simply rotate the opportunity to different employees each year. You can also have employees attending training bring back skills or knowledge, such as coding or compliance, and train the rest of the team on what they’ve learned. That can boost the productivity of your training dollars and your team.

Do you notice employees slumped at their desks in the afternoon, hours after their morning coffee? They probably need some fresh fuel in the form of snacks — especially those who scarfed down double cheeseburgers for lunch. A whopping 94 percent of Americans snack every day, but 60 percent of them wish they had healthier snack options available.

So provide them! Stock a pantry with fruit, nuts, granola bars, jerky and other foods that appeal to a variety of cravings while also providing energy. If you and your teammates don’t have the time to purchase snacks on a regular basis, you can contract with a snack provider like SnackNation to fulfill the need. And it couldn’t hurt to provide incentives to drink more water, like flavor drops or reusable company cups.

Clearly reward what you want more of.

While some companies have turned to gamification or leaderboards to motivate employees, not all staffers will respond to increased competition — and that’s OK. But every employee — competitive or not — silently observes how leaders in their company reward and punish their colleagues’ behavior. What gets rewarded gets replicated.

Make it a point to enforce habits and actions you want to see among your teammates, rewarding performers who should be emulated with promotions, bonuses, or other forms of recognition (as warranted and as needed within the company, of course). Because punishments can be more effective than rewards in situations where you want to mow down impulsivity, do the inverse — don’t promote people who are selfish or shortsighted, and don’t reward their behavior with more minor acknowledgments like awards or company wide emails. Your spoken kudos and unspoken disappointment will be absorbed by your employees and used to drive future behavior.

Some companies cater to ergonomics purely as an HR issue, but the value of a workspace built for human bodies is real: More than 40 percent of injuries incurred at work are sprains and strains. Sitting at a desk all day, moving only to visit the kitchen or the restroom, is bad for you — and exercise later can’t simply undo the effects.

An active workspace is built to move people around so their spines don’t curve to their chairs, they can move to the best space for the project they’re working on and they’re no longer isolated by cubicle walls. Standing desks, such as those from VARIDESK, and memory foam mats are an easy way to begin investing in an active workspace. Removing the interrupted line of sight created by cubicles is another.

Perhaps the most affordable way to boost productivity is by taking things out of your office rather than adding them. Do you have a process that’s been layered on over the years? Are there three different expense reports employees have to fill out? Is your reporting structure so confusing that people who have been in your organization for five years still don’t know who to turn to for help? These are all areas where simple streamlining can eliminate steps and boost your co-workers’ productivity.

Another roadblock can be a toxic employee, and this is one area where many leaders see dollar signs and hesitate to make a move — they’ve seen the studies showing that replacing an employee costs 10-30 percent of his or her annual salary. But the truth is that a toxic employee has a bigger impact on your business than a rock star does, so removing people who are a drain on the most productive members of your workforce can result in big savings in terms of time and money.

Every company could use an injection of productivity, and you don’t need a complete overhaul — or a loan — to make an impact. Simply creating a comfortable and safe environment and eliminating confusing processes, bad habits and a lack of essential skills will do the trick. While others might be dealing with sluggish productivity, your company doesn’t have to follow suit.